It seems each time this blog reaches an additional 100,000 views, it causes me to reflect on how fortunate our family is. Yesterday evening another milestone was reached, as readership passed the 300,000 mark.

I suspect it’s quite rare for a personal blog to have such a large following. I base this on my unscientific observation of Google Image search. Let me explain. When we hit 100,000 views in January, I had tons of files to pick from. At 200,000 there were noticeably fewer, but still plentiful. Looking when the blog reached 300,000, I found just one (and you see it above).

Now, I’m not the creative type. I can draw a fairly good stick figure, but don’t ask me to add detail (beyond a mouth, nose, eyes, and eyebrows). Drawing ears just makes my stick figure look ridiculous. I can easily designate the sex of my stick figure (it’s not what you’re thinking) by drawing a bow on a girl’s head. Although, I can certainly see how a couple carefully placed circles would do the trick. But, in my world, my stick figure would resemble Pamela Anderson. 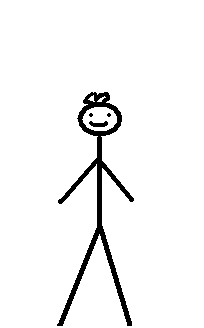 So, here’s my problem… at 400,000 I just might have to create my celebratory image. Eeeeeeeee-gads! Hopefully PowerPoint will bail me out. It does do circles, right?

Enough of that already. I’m just talking in circles. The true significance is this number — 300,000 — is, in some way, a measurement of how much people care. So much so, that many check the blog every day. Sometimes more than once a day.

You have chosen to go on this ride with Ryan and my family. You tolerate my wild mood swings. My rants. My anger and hatred. My love and devotion. You don’t get offended by my sometimes lame humor (reference the “circle” innuendo above). It’s a beautiful thing to feel the love.

Now, before I get any emails telling me I am dissing my wife, I just need to let you know Sue and I BOTH agree she is prudish. I blame her wonderful parents for raising her too well. She was entirely too sheltered. Pure as the driven snow.

She watched my video yesterday, Executing a Transfer, and called right afterwards. She made a few compliments, but was quick to get to the critique. She says (in a playfully scolding way, I’d like to think) “I really don’t approve of two things: Ryan’s bum showing (I’m still debating if it did. The more I see it the more convinced I am it’s just his thigh) and the comment about “blue balls”.

Me: “Do you know what blue balls even are?”

Sue: “No. But, it just sounds nasty. Also, it came from you. So I know I should be offended in some way.”

Hmmmm…. I still don’t think she knows just how much she should be offended.  :/

Leave a Comment. I read EVERY one! Cancel reply

Just One More Time. Forever is Worth it.

Wife's Turn: Family. It's What We Do.

Ryan, I know What You're Thinking.

I Lost My Big Brother that Night.

Her Turn to Cry: I Want the Old Ryan Back.

I Lost My Hero.

SSL Certified: We are Verified & Secure!

Get Email Alerts of New Posts!